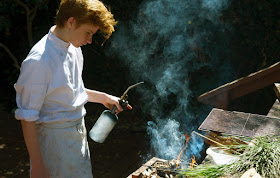 You may remember Chef Flynn McGarry, the wunderkind once featured in that New York Times piece that went viral.  He's the "kid chef" as most people called him.  Well, there is a new documentary about him that hit the Sundance Film Festival, opened in limited release on November 9 and will roll out across the country soon.  And if you are a foodie you may find it quite interesting.  We did when we prescreened the film this week.

The documentary "Chef Flynn" features Flynn, the boy chef, his somewhat of a "stage mother" and an interesting story of creativity that unfolds before us like a sheet of pastry dough, rife with issues and criticism, indulgences and fates, imperfections and the wonder that maybe McGarry is to food the equivalent of what Mozart was to music.

He gains media attention due to his age and the unusual career path he followed, dropping out of public school at a very young age for home schooling which pretty much seems to have been turning his bedroom into a kitchen/food laboratory all with the blessing and extensive funding of Mommy.  Not a conventional path, indeed.  For him, of course, it was a natural thing but when he takes his first step into the limelight, the New York Times Magazine cover story, he finds that with fame there always comes stinging criticism.  He knows he did not do the fifteen years of grunt work and apprenticeship that others have done to get this.  Yes, his parents are Hollywood creative types with lots of powerful connections.  Sure, he is younger than them.  He's been lucky, indulged, well-funded but ... is not the food good?  And isn't the pang of jealousy clearly apparent, as is often the case, in the most vocal of critics?

It's an interesting film and one I encourage you to see if, and it may not be possible, one can ignore the age of the person being profiled.  That is the challenge that seems the point of the film.


We were provided with a screening of this film at no cost and with no promise of any editorial consideration.
﻿
The Boston Foodie at 10:06 AM
Share